The City is for All organized the 8th March for Housing, a march for the right to housing on Saturday, September 29, 2018. About 1,500 people attended the event to draw attention to the housing crisis in Hungary, the massive eviction of families, and the laws that criminalize homeless people. 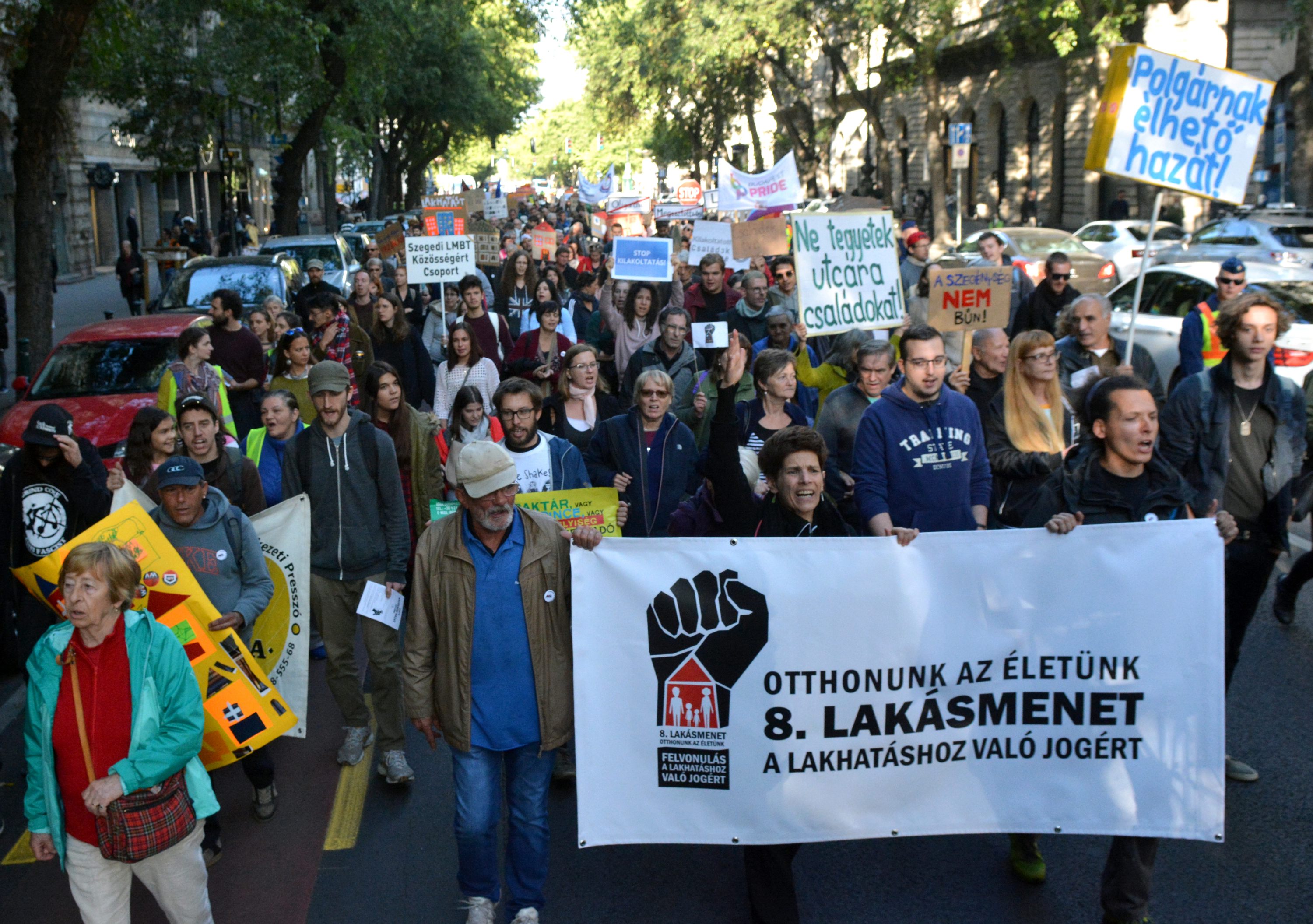 The march started at the Academy of Music and ended on Szabadság tér. In front of the Academy, members of The City is for All gave speeches. Among them were those who live in housing poverty, such as Fanni Aradi and those who are currently homeless, like Bertalanné Lakatos.

Fanni Aradi spoke about how in the past, as a student she experienced housing poverty and how she is currently – yet again – living in poor conditions. As an activist, she understands that having a safe home is now the privilege of the elite: „I lived on the edge of a segregated neighborhood, I lived in a village in Serbia and I also used to live in a three-room-apartment. My living space right now: a plastered former wood shed. (…) I never felt that my housing situation is exceptional, but now I know that I have been in a special situation. Not because we never had money at the end of the month, but because regardless of this, we still always LIVED somewhere.”

After their speeches, the march continued on Király Street, Nagymező street, Andrássy út, József Attila street and Nádor street on to Szabadság tér. Protestors demanded the right to housing and an end to evictions. Many questioned the government’s true intentions regarding families and their use of the slogan „Year of Families” in 2018. Many of the banners used in the demonstration were made by homeless people living in shelters with the help of members of The City is for All.

In Szabadság tér Alexandra Szarka and Vera Kovács, two social workers gave speeches. Alexandra Szarka began her speech: „I’ve been a member of The City is for All for 3 years. Since then, three of my fellow activists who were homeless died. None of them lived for 60 years, some didn’t even reach 48. A good friend from our group is now in the hospital. I wanted to say this in the beginning to make sure that we think about the same thing when I say: Our home is our life. My fellow activists did not have a home. ”

Then they both drew attention to the fact that they have very similar experiences as both professionals and activists. They see that the current social system does not serve the interests of people living in poverty, but its aim is to persecute them. Vera Kovács said that being a social worker today and helping homeless people are almost considered acts of radicalism. It is important, however, to remain in solidarity with each other and to keep up the struggle for dignity of people living in housing poverty. „If solidarity is a rebellion, let us all rebel: let’s turn to each other, let’s not let politics turn us against each other, and those who are in a better situation, let’s try to walk around with open eyes. A good word, a phone call made in time, or even one cup of hot drink in the winter can save a life. Until there’s no real solution, we can only count on each other!” – said Vera Kovács.

The 8th March for Housing was completed with a picnic organized by Food Not Bombs group and the concert of the band Csaknekedkislány.

The City is for All turned to the local governments of Budapest with a freedom of informatiom request before the march. Twenty districts responded to the request and according to the data they shared, there are at least 2500 empty municipal dwellings in the capital, 20 per cent of which are in habitable condition. Also, municipalities spend at least 190 million HUF on each empty dwelling per year. All this means that there are resources that would make officials able to provide housing instead of criminalizing and evicting those in need.