On October 15, 2018 a new law came into force, penalizing homelessness harsher than before. Namely, the Constitution amended in the summer of 2018 declares: „Living habitually in public spaces is forbidden.„ Contemporary writers, actors, stage directors, reporters and representatives of civil society organisations protested against the legislation on October 14 under the slogan „One Sentence„. The organizers asked contemporary Hungarian writers from poets to songwriters to react in one sentence to the incriminating one-sentence amendment of the Constitution cited above. 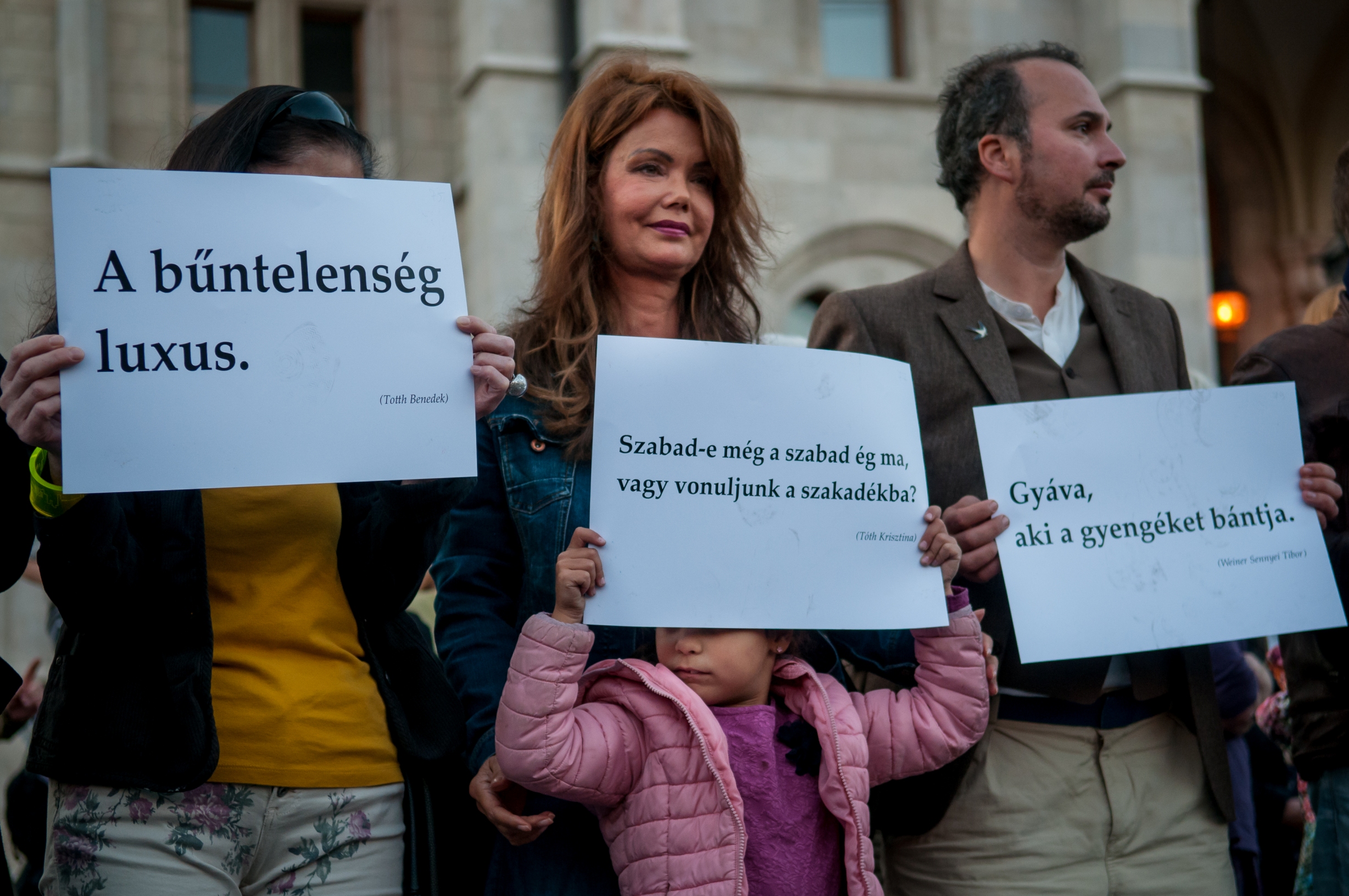 Nearly eighty authors took up on the invitation – Zsuzsa Takács, Krisztina Tóth, Zsófi Kemény, Pál Závada, Lajos Parti Nagy, Sándor Radnóti, Anna Szabó T. and János Lackfi, just to name a few. Their phrases were written on boards and held up by Judit Hernádi, Lajos Parti Nagy, Imre Mécs and Erzsi Sándor among other writers, artists, journalists and representatives of civil society organisations. Màrta Erdőhegyi, an activist of The City is for All who has experienced homelessness herself gave a speech in which she stressed that homelessness is a problem that thousands of people are facing: „Those living on the streets also represent the problems of people who are forced to live in homeless shelters or sleep on hidden benches and therefore are not as `visible`. Homelessness on the streets shows what is happening in the housing sector in general.„

While the government has been criminalizing homelessness since 2010, it does not do the bare minimum to prevent homelessness. With the 7th amendment of the Constitution „habitual residence in public space” became punishable in general, thus allowing for a wider-range of retributory devices against our most vulnerable citizens.

From October 15 onwards, homeless people who do not use social services are threatened even by prison sentences. According to the law, if a homeless person does not leave the streets after a warning or the authorities `catch someone in the act` for the fourth time over the course of three months, the police will have to detain them. This entails taking the person into custody immediately for a maximum of 72 hours when the case is brought to the court in an expedited procedure, which may also result in an immediate jail sentence. During the procedure the belongings of the `suspects` are taken away from them and `un-storable items` are demolished.

The City is for All has been fighting against the criminalization of homelessness since 2010. We strongly oppose the government’s way of dealing with one of the most pressing social issues of our country. We are strongly opposed to these measures because they are an affront to the human dignity of the poorest, pushing them into further social exclusion and discrimination. We are opposed to the government`s housing agenda because it does not entail any support for those in danger of losing their homes. Local municipalities actively take part in evictions. Furthermore, we are opposed to the government`s manner of viewing and treating social service-providers as police rather than as helpers.

Even though the legislation in question does not empower the authorities to demolish self-built shacks, the police have threatened people living in forests many times in the past few days. As a response, the activists of The City is for All have started a campaign of resistance for people to sign up of they want to defend such shacks. Signatures are also continuously collected for a petition that would stop the eviction of families with children without any alternative placement.