In Budapest there are barely 80 public toilets for more than one and a half million people. In addition there are very few public toilets that are free of charge and accessible to disabled people. The City is for All (AVM), the Insider Outsiders’ Public Choir (BKK) and the Living Independently – Living in a Community organized a joint action on July 12, 2017 in front of the Interior Ministry and the Ministry of Human Resources (EMMI) to call attention to this situation and claim immediately comprehensive solution. 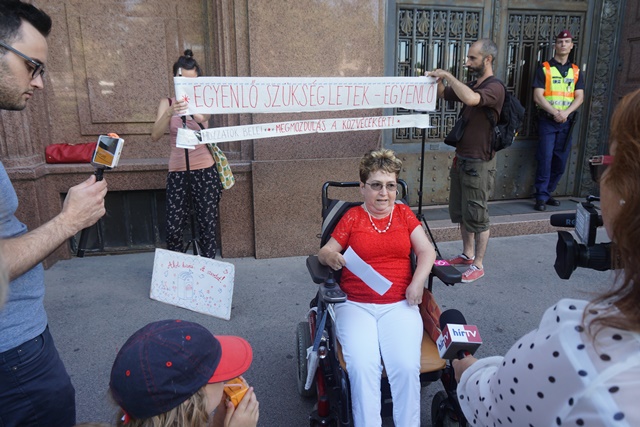 As a result of a homeless activist’s motion in March 2017 the Commissioner for Fundamental Rights asked the Ministry of Home Affairs to consider introducing a law that would make the operation of public toilets a mandatory task. He also invited the mayor of Budapest to voluntarily operate public toilets in the capital until the legal situation is resolved. So far, no progress has been made in this regard! Meanwhile one and a half million Budapest residents as well as tens of thousands of commuters and tourists still have to pee on the street. 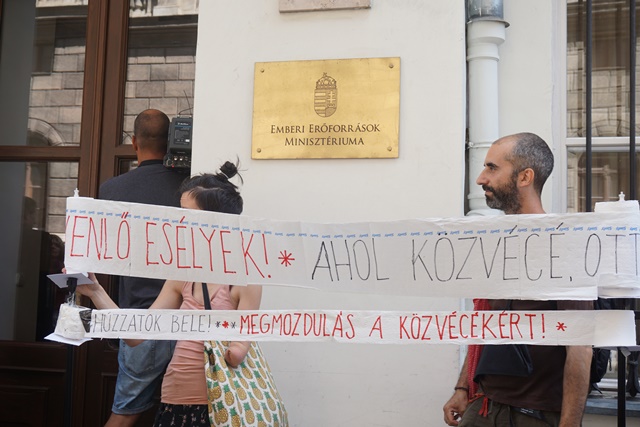 Today, during the demonstration Erdős Virág read her poem written specifically for the campaign, an activist of The City is for All tried to get into the Interior Ministry’s toilet but was not allowed. After he was refused entrance, Miklós Orbán called attention to the significance of using the toilets of public facilities. Afterward, Erika Hruskó, a disabled activist gave a speech: „I would like to simply roll into a clean toilet that I am able to use, wherever I go, without having to plan a separate route, make a different schedule or hold myself. I want accessible and clean public toilets in my own life and not in my granddaughter’s life.” Meanwhile the activists of AVM and BKK played toilet pool and darts with the participants, and read Tibor Bornai’s poem: Who just went to pee into the confectionery. In the end, all the demonstrators – carrying 15 baby potters and one neon-colored toilet – went over to the Ministry of Human Resources where the homeless activist tried again to get into the toilet of the public facility. Unfortunately his mission was again unsuccessful. The two ministries denied the request of our activist just as they did their responsibility for public toilets.

The City is for All continues to fight for more high quality, free and accessible public toilets in Budapest. This problem could be solved if the operation of public toilets became a legal obligation for local municipalities. During our campaign, hundreds of Budapest residents’ letters sent to Budapest Sewage Works demanding more public toilets. We organized awareness-raising events, launched a series of blog posts and a separate Facebook page called Public Toilets for Budapest. We wrote an open letter to the mayor of Budapest, we negotiated with the Municipality of Budapest and sent them our list of proposals. To this day, nearly 2000 people have signed our petition calling the Interior Ministry and the Municipality of Budapest to handle the issue. We continue our campaign because human need is greater than the law! 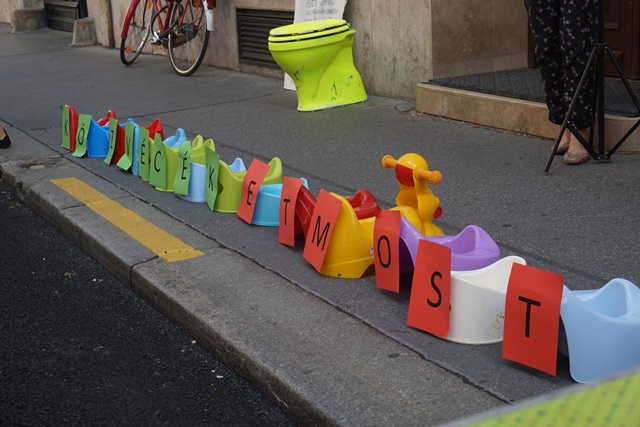