We received notice from a friend in Poland on the 27th of April Łukasz Bukowski, a participant of Anarchist Federation Poznan, Poland, went to prison for three months. He had been charged and sentenced with the breach of bodily integrity of a police officer which had happened during the eviction blockade of a disabled woman and her husband, Katrzyna and Ryszard Jencz, from a tenement house in Poznan, Poland. Lukasz refused to pay the fine, which then was changed to community work and then to a prison term. He appeared at a prison in Poznan where he will spend the next three months. 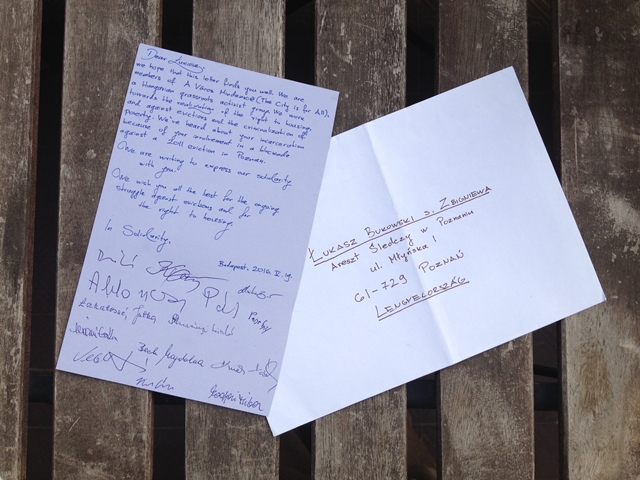 According to a report, the eviction of Ryszard and Katarzyna (who is seriously ill and has been in a wheelchair for many years) took place on 25th of October 2011. Despite Katarzyna’s visible serious condition, the court, which issued the eviction notice, did not give them social housing (which is required by the law but courts often refuse to do it due to lack of social housing). So, in fact, the couple was evicted on to the streets. Large police forces were mobilized and showed up at the tenement building a few hours before the eviction, cutting off the access to the building and the apartment. Around 70 activists tried to block the eviction. Some people living in the neighborhood also joined them but in the end Katarzyna Jencz, because of her worsening health condition had to be transported out of the building in an ambulance. The debt collector then seized the apartment. During the blockade, three people, including Łukasz, were detained. He claims that the charges he faced were not valid and his conviction was a form of revenge for his social resistance. The police also charged two more people with leading an illegal gathering but they were both acquitted.

Every year Polish courts issue from 30,000 to 40,000 eviction notices. Debt collectors perform about 8,000 evictions, they are often accompanied by the police. In Poznan the authorities are planning to perform 250 evictions from social housing until November.

We expressed our solidarity with Łukasz and his fellow activists, through a letter we sent to the jail, and which reads as follows:

we hope that this letter finds you well. We are members of  A Város Mindenkié (The City is for All), a Hungarian grassroots activist group. We work towards the realization of the right to housing, and against evictions and the criminalization of poverty. Most of us are either homeless or live in severe housing poverty. We’ve heard about your incarceration because of your involvement in a blockade against a 2011 eviction in Poznan. We are writing to express our solidarity with you. We wish you all the best for the ongoing struggle against evictions and for the right to housing.