We have come here today on behalf of Migszol, the Migrant Solidarity Group of Hungary. We are a political activist group of migrants, refugees, and Hungarians fighting for the rights of people impacted by the discriminatory border regimes of Europe and Hungary.  Migszol is here today to say that we stand in solidarity with The City is for All (AVM) and the struggle of homeless people in Budapest and Hungary. We believe that the struggle of homeless people in Hungary and the struggle of migrants and refugees in Hungary must be understood as the same fight – it is the same fight against poverty, against discrimination, against violent policies – it is the same fight for a tolerant more inclusive Hungarian society. 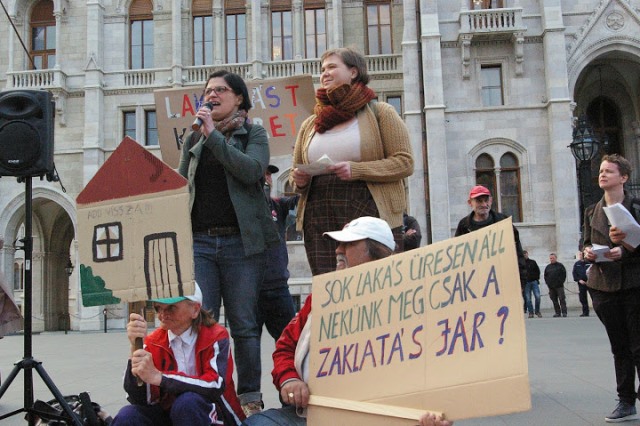 The issue of homelessness has been one of Migszol’s core concerns since the beginning of our group. Migszol recognizes that refugees face an identical neglect and exclusion from Hungarian life as poor and homeless people. Furthermore, AVM’s struggle against homelessness is especially the same struggle of Migszol’s for refugee rights because the reality is that, for years now, many refugees in Hungary have been at risk of being homeless.

Migszol recognizes that many refugees face homelessness because the Hungarian state has consistently failed in its duties, under international law and basic moral decency, to provide adequate social assistance and integration to refugees in Hungarian society. This has had the consequence that many refugees are driven directly from the refugee camp in Bicske to the homeless shelters of Budapest.

It is no surprise then that our group Migszol grew out of protests by Afghani refugees in 2012 who were demonstrating against the threat of becoming homeless after leaving the refugee camp.

What is even worse is that as of April 1, the Hungarian state has stopped providing ANY social support to refugees in Hungary. This means that refugees now have ZERO social assistance when they try to build their new lives in a society where they do not speak the language, a society that is increasingly xenophobic towards them. Migszol is outraged by this change which means, undoubtedly, that more and more refugees in Hungary will face homelessness and insecure poor living conditions. For this, Migszol wishes to say SHAME on the Hungarian government!

We are standing here today to say that the government’s sink-or-swim policies for refugees and poor people in Hungarian society simply do not work. The concrete shameful issue that has brought us here today is this ongoing criminalization of homelessness: it is unethical, it is punitive, and it is violent – and it must be changed!

Migszol is happy and proud to stand with AVM in the streets today. We are united in our shared rage and indignation, and our efforts to work together for a freer and more progressive Hungarian society. We are inspired to see so many people here today who believe in change, who are standing up and saying NO to the Hungarian state. May we persevere! Your struggle is our struggle! Thank you.