The City is for All and Dr. Bernadett Szél of the Politics Can Be Different Party (Lehet Más a Politika, LMP), are proposing a bill to withdraw the current regulation that defines living in public spaces as a petty offense. The intent of this proposal is to end the persecution of homeless people living in public spaces in Hungary. The Hungarian Parliament will vote on this bill in April, 2016. Please support this bill by writing a lettet to all members of the Hungarian Parliament.

Please copy us on the email you are sending to our MPs so that we may keep of track of this campaign ([email protected]).

PLEASE SEE A SAMPLE LETTER BELOW 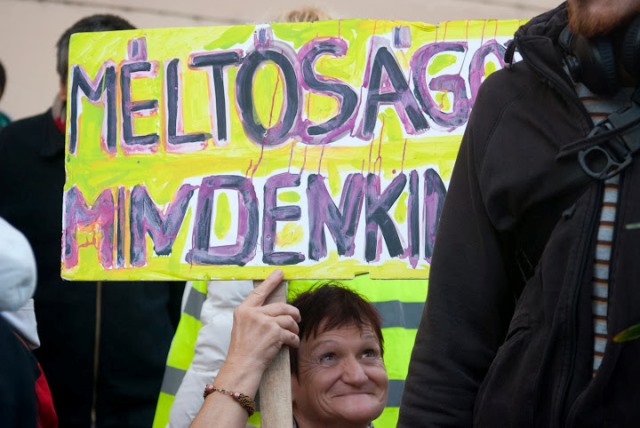 Dear Member of the Hungarian Parliament,

Please vote „yes” to this proposal if you agree with us on the following:

1. Criminalizing those who live in public spaces will not resolve the massive problem of homelessness;

2. Cracking down on homelessness is an inhumane practice that violates the 38/2012. (XI. 14.) directives of the Hungarian Supreme Court, which say:

„living in public spaces by and of itself doesn’t violate the rights of others, doesn’t cause damage and it doesn’t endanger public safety, nor does it diminish the rightful usage of the public space; therefore, neither the removal of the homeless from these pubic spaces, nor forcing to make them utilize social services, should be considered legitimate and lawful reasons to create a case for making living in public spaces an offense against the laws.”

3. It is revolting that since October of 2013, charges have been brought against homeless people in more than 500 cases just because they have nowhere else to live;

4. In his April 2015 report, the Ombudsperson for Fundamental Rights stated that it is extremely dangerous to persecute homeless people:

„persecuting the homeless because they live in public spaces didn’t end up diminishing the number of people living on the streets, but it became harder for social workers to locate them and thus their exposure to life-threatening situations has increased”.

5. Since the law changed in 2013, a minimum of 284,460,000 HUF was spent by the state on persecuting homeless people, which is a wasted and ill-used amount of public money.

We are asking you that in addition to voting for this bill, as a Member of Parliament, devote your attention to the prevention of homelessness, as well as quality services and housing support for homeless people and work actively on the establishment of unified and socially inclusive housing policies.