The Budapest Police Headquarters (BRFK – Budapesti Rendőr-főkapitányság) and the Hungarian Helsinki Committee reached an agreement to ensure that the principle of equal treatment is followed in case of homeless and other people living in poor social conditions during police measures like identity checks. The agreement was announced during the joint press conference of the Hungarian Helsinki Committee and the The City is for All (AVM – A Város Mindenkié) homeless interest group on February 18, 2016. 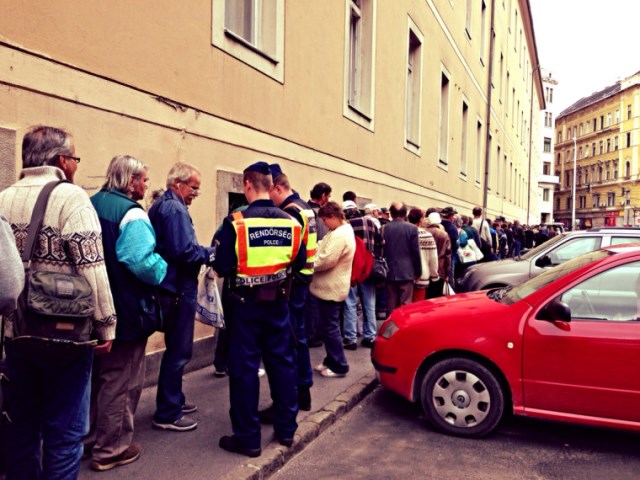 As per the results of research conducted by The City is for All group, police identity checks focus on homeless and other poor people unequally without objective reasons. According to the research ’Street and law’ (Utca és jog) conducted in 2011-12, 60% of 400 homeless survey participants confirmed being subject of an identity check at least once a month. This practice occurred on a weekly basis for 20% of the respondents. The joint research of the Hungarian Helsinki Committee and The City is for All conducted in 2014 showed that a homeless person needs to present his/her identity card twice a month on average while other pedestrians are hardly stopped by the police. Identity checks are usually performed during food donations or around social and health care institutions without proof of transgression. The reason for the identity check is usually missing, the process of legal remedy is not explained. During the research in 2014, none of the examined identity checks of homeless people proved to follow the requirements set by the police law.

The Hungarian Helsinki Committee approached The Equal Treatment Authority (EBH – Egyenlő Bánásmód Hatóság) with the support of AVM to submit a public claim against BRFK. The procedure – started in May 2015 – ended with an agreement approved by the EBH on Jan 20, 2016.

During the press conference at Blaha Lujza square, two homeless activists talked about their own experience. Ferenc Sándor shared that during the test organized jointly with the Hungarian Helsinki Committee, he and his friend with proper housing background were sitting on benches couple of meters apart in front of the Nyugati railway station in the evening. „When policemen showed up, they conducted an identity check with me without any reason, while ignoring my friend. A homeless person needs to store his/her assets in bigger bags. These bags equal homelessness for many. I think they assumed that I’m homeless due to the bag I had with me.” When Ferenc asked the policemen about the reason for the identity check, they referred to his age and his safety. The identity check had no result, no additional measures followed.

Miklós Fekete-Nagy has also participated in the research, he was submitted to an identity check during the test when ten homeless activists documented their interaction with the police for two weeks. Miklós shared that one time he was subject of an identity check during the food donation of Hungarian Charity Service of the Order of Malta when six policemen performed identity checks for all queuing for food, again no additional measures followed. Next time he was subject of an identity check when he was travelling to an AVM meeting with a sight-impaired friend. The policeman approached them with the question „Speak a little Hungarian?” then checked their identity and left without additional measures. When they asked for a reason of the identity check, the policeman confirmed it as a routine practice however that does not comply with the police law. „During the first 52 years of my life when I owed an apartment, my identity was checked 3 times. Since I’m homeless, this happened twice in 2 weeks.”- Miklós said.

In the agreement approved by The Equal Treatment Authority, BRFK highlights that police leaders expect equal and professional measures from police officers e.g. harassing identity checks are not accepted. The parties also agreed on next steps to improve the situation.

As per the agreement, the Police Commissioner of Budapest issues a circular to ensure a reason is in place to conduct identity checks of people living in poor social conditions. It draws attention to the fact that routine identity checks are especially degrading in terms of equal treatment during food donation or around social and health care institutions. Identity checks can only be performed when justified, well defined reasons are in place.

BRFK agreed to follow up with the Hungarian Police Headquarters to replace the currently used „general identity check” terminology in the police system as reason for the identity check with the reason codes set in the police law. This will support the verification that proper reasons are in place when identity checks are performed.