The city is for all welcomes the announcement of the mayor of the VIII. district of Budapest, Máté Kocsis made in front of the municipal assembly about suspending the evictions in the district and ordering the municipal government to review the processes leading to evictions. In the last months a wave of evictions never seen before started in the district. Dozens of families were evicted by the bailiffs of the municipality, many others left their apartments willingly after receiving the evictions notice. There are a number of evictions scheduled until the 1st of December, the start of the winter evictions moratorium. After the announcement of the mayor, many families can heave a sigh of relief knowing that they will have a roof over their heads during the winter. 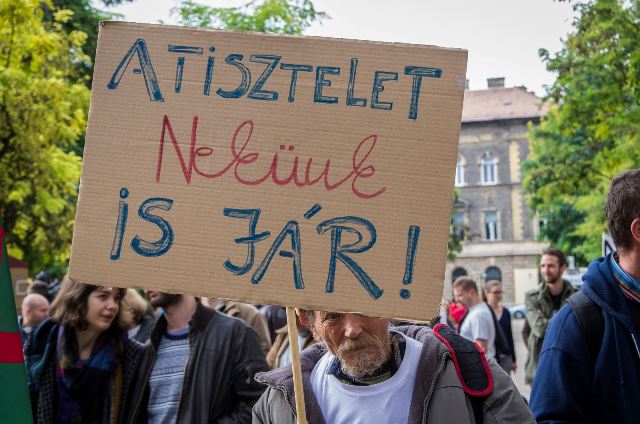 The announcement and change of course by the mayor can mostly be attributed to the residents facing eviction in the last weeks, who, through different ways dared to defy the will of the local government. There were people who had the courage to share their views with the public, many took part in demonstrations against the evictions and have shown solidarity with the activists trying to stop evictions by forming human chains at the scene. Many residents of the VIII district attended the protest organized by the City is for all and the Hungarian Network against Poverty last Saturday, many of whom have lost their homes, and many, who’s evictions have been scheduled for the following week. There is a sense of desperation and rightful anger in the parts of the district affected by the wave of evictions ordered by the local government.

But the mayor is not honest when he makes the municipal bureaucracy responsible for the local resistance against evictions, when in fact the bureaucracy is executing a clear political will.

As we wrote earlier, behind the measures of the local government one can discover the intention of changing the structure of resident’s in the district. Besides many media appearances of the mayor one can derive this conclusion also from the fact that in the last phase of the Magdolna city renewal program the the local government chose the participating houses based on the high numbers of residents with outstanding rent payments, but did not make sure that the residents can stay in their rented apartments after the renovations. Thus, not surprisingly, after the renovations the evictions started. But the citizens of the VIII. district, as all citizens, need proper housing. The renewal of an area cannot lead to the persecution of the poorer citizens.

But if this happens, the local decision makers have to bare the political consequences of dispossessing the citizens. The decision of the mayor make it possible for the local government to change course from its inhuman practice and dedicate its housing resources and policy to the service of its citizens.

And in general, recognising that housing problems pushing the residents of the district into deeper and deeper poverty cannot be solved with evictions.

For this a responsible housing policy is needed, which obviously cannot stop at the border of the district. We hope that mayor Máté Kocsis, who also serves as the head of the ruling party Fidesz in Budapest and is the part’s director of communications will recognise the depth of the problem caused by housing poverty and the need for the missing political answers to the problem.

Today’s decision gave many families struggling for a long time a pause to take a breath, yet we should not forget that delaying evictions is not a permanent solution. We should also keep in mind that the municipal government of Józsefváros evicted more than 300 families in the last 18 months according to their own data. If the mayor is serious about his announcement made yesterday, then these families should also receive some compensations, since they are the victims of the same process that has now been temporarily halted.

Máté Kocsi, as the mayor of the 8th district should represent all residents of the district, not only those deemed worthy based on some vaguely defined criteria. The residents cannot get an appointment with the mayor and the municipal representatives are not willing to consult the people who voted for them. We think this is unacceptable. It is the responsibility of the mayor to consult with the residents affected in order to assess the housing situation in the district. The City is for all thus have sent a letter to the municipal government of Józsefváros: we are initiating a consultation between the residents affected by evictions, the mayor and the representatives of AVM.