GYULA: Hi! I am Gyula Balog, a homeless activist in The City is for All. I am the coordinator of our sensitizing school program.

TESSZA: My name is Tessza Udvarhelyi. I am one of the founders of The City is for All. I am a cultural anthropologist and I live in stable housing.

GYULA: We are homeless, so we have to sleep in public spaces. For four years now, the authorities have used the law to harass and persecute us.

TESSZA:  I live in one of the green districts of Budapest in my own home. Every night I go to bed in peace as I know that I have secure housing for the rest of my life.

GYULA: When we have to go the bathroom, we have to use public spaces as there are no free public bathrooms in the city and they won’t let us enter the Hilton Hotel either. We can be fined for up to 100 Euros for this.

TESSZA: If I need to go the bathroom in the city, I can easily go into a nearby café and use theirs for free. If I have time, I can grab a coffee and a cookie, too.

GYULA: We have to stand in line for hours when we try to get our food at a soup kitchen. In the meantime, the police may check my identity twice.

TESSZA: I often spend time at outdoor places where I can order whatever I want. Nobody every asks me why I am there and what I am doing.

GYULA: When we rest on a bench in a park or sell the local streetnewspaper, we are almost always checked by the police. Why don’t they check people in suits?

TESSZA: I often hang out with my friends on a bench in a park or on the street. The police has never asked me for my identity card.

GYULA: When we ask for help regarding our housing, we are sent to mass shelters.

TESSZA: When I ask for help regarding out housing, the state offers me a subsidized mortgage. 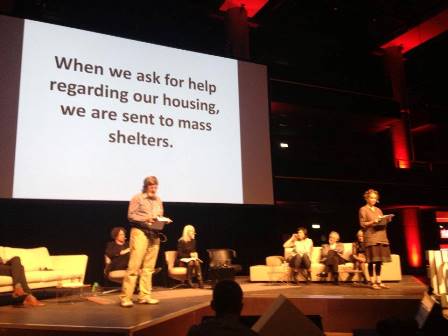 GYULA: My country is the only one in the world where the possibility to criminalize homeless people is included directly in the Constitution.  Based on this law, thousands of homeless people have been harrassed and sent away from their sleeping places in Budapest over the past 4 years. Since October, 2013 charges have been brought against homeless people for sleeping in public spaces in more than 450 cases.

Recently, it has become popular to install spikes and bars on shop windows and others places to sit. The only purpose of these is to keep away those who have nowhere to go home.

Our decision-makers would send all homeless to mass shelter. Even though the time of lagers is over, the conditions of homeless shelters in Hungary often resemble these.

If someone builds their own home in a forest, they are in constant danger of being bulldozed by the authorities.

The number of vacant apartments is ten times bigger than the number of homeless people. We can see these and we don’t understand, why we have to live on the streets.

In the past 25 years, social housing has been privatized, the housing subsidy system has been dismantled and the social support system is being destroyed. The money allocated for urban rehabilitation has not been spent on the renovation of housing, but on shiny new public spaces.

The great majority of public money spent on housing subsidies goes to the richer part of society in the form of subsidized mortgages. Clearly, there is money for housing, but this money does not go to those who would need it the most.

The persecution of homeless people is part of a much broader politics of punishment. Today, poor people, the unemployed, people living with disabilities, the Roma and migrants have all been declared scapegoats. According to the government, these groups are to be blamed for our lack of progress. In reality, the policies of the state support the enrichment of higher classes through the dispossession of people living in poverty.

In The City is for All, we have been working for six years to change this situation. We have small successes. For example, we have managed to launch housing first programs in several districts of Budapest. To implement these programs, we needed the help of architects and construction managers who know how to turn extremely damaged units into livable and dignified housing. But for real change, we need transformation at the systemic level. To achieve this, we also need the support of architects and designers to stand up for socially inclusive design and affordable housing.

GYULA: Today in Hungary there exists neither a shortage of housing, nor is there any national housing policy in place. If we had proper housing policies, I would not have to sleep, eat or go to the bathroom in the streets and the police would not harass me either.

If we had proper and socially sensitive housing policies in place in Hungary, our public spaces would also be much more equal. In that case, it would not be only at this conference that I can be equal to a young middle-class social scientist, but also in our public spaces.