Thank you so much for having me here! My name is Tessza and I represent The City is for All, A Város Mindenkié, a homeless advocacy group made up of mostly homeless people. I am very happy that we are all here to celebrate the second birthday of Migszol. This is a big achievement! 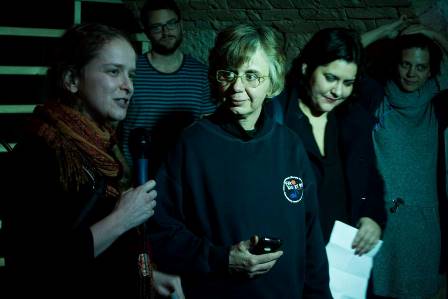 Since the beginning, I personally and A Város Mindenkié as a group have been a great supporter of Migszol and we have been watching the development of the group with great curiosity and pride.

As far as I know, AVM had been an inspiration for the foundation of the Migszol and this feels like a great honor. Since the beginning, the two groups have been in close contact and we have supported each other’s work. In addition to ideological support, we had the chance to exchange experiences about strategic planning, women’s issues and addressing homelessness among refugees. Migszol has been there at the Fourth Vacant Buildings March and they also held a workshop in our occupied building in Benczúr utca back in September. We were there at their demonstration two years ago when they demanded housing and fair treatment for refugees in Hungary and we also attended their annual event, Circles of Silence.

A Város Mindenkié would like to see all social groups experiencing oppression and exclusion form their own advocacy groups and social movements. The fact the Migszol is organizing migrants and refugees is a wonderful and very important step in this direction.

We are hoping to see Migszol grow into an influential mass movement with supportive Hungarian citizens and many many migrants standing up for their rights and dignity.