To our comrades, friends and partners who stood and continue to stand in solidarity with us through protests, petitions and other forms of solidarity actions we wish to say thank you. 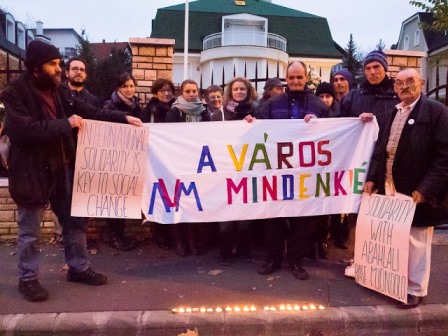 In this difficult journey we have discovered true friends, real partners and real comrades who have walked the journey with us without being judgemental, we are grateful.

We have discovered our strength and our hope in those of you who organized solidarity actions in London offices of the South African High Commissioner to UK on Saturday, 22 November 2014. The solidarity action that took place in New York City and Chicago on the Friday, 21 November 2014 in United State of America was indeed an inspiration to us in South Africa. The Solidarity action that took place in the city of Budapest in Hungary on Monday, 24 November 2014 and yes to all the delegates of the International Meeting on the Right to the City that met in Sao Paulo, Brazil to advance a Right to the City in November 12 and 14 we salute you all. Respected scholars here at home South Africa and abroad who signed petition in support of our struggle we salute you. Today the International Networks for Economic, Social and Cultural Rights (ESCR-Net) connects more than 270 NGO’s, social movements and activists from 70 countries around the world, offering a strategic exchange and collective advocacy to build a global movement to make human rights and social justice a reality for all has issued a call on South Africa to protect leaders and members of Abahlali baseMjondolo from attacks.

We did not want to attempt mentioning you one by one as this may exclude a lot of you but please allow us just to mention the few who did an excellent work in organizing these solidarity actions into action. War on Want’s Seniour Programmes Officer Informal Economy Saranel Benjamin, Kwadwo Arbah (Justin), Koffie, Jenny Morgan in London. JR and Toussaint of the Chicago Anti-Eviction Campaign in Chicago US. Picture The Homeless, comrade Rob Robinson, Lynn and Chris Nizza of The Sleeping Giant in New York City. The City is for All Hungarian activist group (AVM) in Budapest we salute you. Delegates of the International Meeting on the Right to the City that met in Sao Paulo, Brazil and The International Network for Economic, Social and Cultural Rights,Thea Gelbspan Membership and Solidarity Coordinator.

The letter should not be viewed as the end of the struggle though, rather a beginning of a long journey for a better society ahead of us. We hope that for a change the ruling African National Congress and South African government will respect you and cease all violent acts against Abahlali and all struggling South Africans in general.