The City is for All Hungarian activists group (AVM) protested with a petition against the killing of four housing activists in front of the South African Embassy, on the 24th of November, 2014. The assassinations raised global attention, and last week a series of solidarity actions took place in Chicago, London, and New York to pay tribute to the victims. 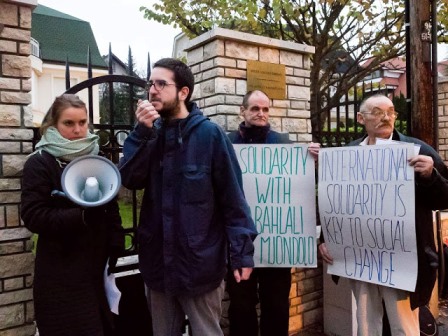 AVM thinks it is unacceptable that the South African government responds with the most extreme suppression to citizens exercising their fundamental political rights. The Group demands that the South African Government investigate the assassinations of the activists through a formal investigation procedure, and that they provide secure conditions for social and political participation.

Following the Apartheid, there have been over 450 political assassinations in South Africa, and in several cases it is suspected that police officers and other elected officials have been involved. Since the 15th of March, 2013 at least four activists fighting for decent housing have been killed.

One of the victims, a 17 years old girl, Nqobile Nzuzua protested against an eviction in September 2013. When the police opened gun fire, Nzuzua was shot in the back while trying to escape. Lately, a woman activist, Thuli Ndlou has got shot to death in her home. It was not an accident, Ndlovu had foreseen it way before saying she would become a target for her human rights activities.

At the solidarity demonstrative action of AVM, Gábor Hajas, a homeless activist of AVM gave a speech demanding that the killings are stopped, and that the past tragedies are investigated properly. Áron Demeter, a member of Amnesty International raised attention to the fact that although South Africa has one of the most enlightened and progressive constitutions, there are countless violations to it in the country every year. The most violated areas are the right to medical treatment for people with HIV infection, the sexual and reproductive rights, the refugee and asylum seekers’ rights, as well as police brutality.

During the demonstration, the AVM and its allies lit candles in memory of the victims, some of which were members of the Abahlali baseMjondolo, the Movement of the Shack Dwellers of South Africa. Abahlali is a democratic, grassroots organization operating in the city of Durban. The organization has done much in order to uncover corruption cases and has successfully fought for the rights of thousands of segregated shack dwellers, thus representing a real threat to the authorities.

The AVM condemns all forms of assassination, political murder or any kind of violence against members of Abahlali or other housing activists. By signing the petition, AVM supports Abahlali in their efforts to create a community based and constituted policy for the residents of the country, and enable them to receive their fair share from the huge land-wealth of the cities.