On September 27, 2014 The City is for All (AVM) organized a series of events to raise awareness about the tens of thousands of empty apartments in Budapest. The group held the 4th Vacant Buildings March with the participation of some 200 people, early in the afternoon, where homeless people and their allies demanded the social utilization of empty apartments. In the evening, around a hundred people squatted a building in Benczúr street, which had been abandoned for nearly 20 years. After the demonstrative squatting around 50 people marched to the City Hall, where they left a message in a giant envelope addressed to Mr. István Tarlós, the Mayor of Budapest and the other mayoral candidates: „Wrong solution: selling out, good solution: letting out”. 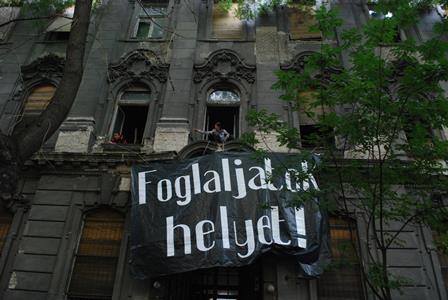 On the Vacant Buildings March, which was heavily secured by the police, homeless participants and those living in housing poverty talked about their hardships at 4 stops in front of empty buildings. Miklós Fekete-Nagy spoke about the situation at homeless shelters and the impossibility of breaking out, while Gábor Hajas, who apart from being homeless also lives with visual impairment, emphasized the lack of housing possibilities for people with disabilities. Márta Erdőhegyi depicted the difficulties of young people who try to get housing through her own story. „I have been self-reliant for a long time, still, my housing situation has not been settled. I am unemployed at the moment and there is no guarantee that I can continue staying in the room where I live right now. I have no idea what will happen if I can’t cover the costs any more. I must admit I have very slim chances to get an apartment of my own. ” At the end of the march Ágnes Csuhai shared her personal experience on how extraordinary it is when someone can get into housing from a shelter: „I was admitted into the LÉLEK Program of Kőbánya. I stay in a shelter for a year. First, it all seemed like a fairy tale. If I work and spare money I can really get social housing. I started to believe the tale as soon as my time came and I received a 24-square-meter refurbished apartment and I could move in.” Other activist groups supporting the march included the Migszol – Migrant Solidarity Group that raised awareness about the housing problems of immigrants and refugees, the Choir of Insider Outsiders who entertained the public with songs about housing as well as the Rhythms of Resistance percussion group.

The building at 4 Benczúr street occupied by the group and their allies used to be owned by the Municipality of Budapest and is currently owned by an offshore company. In the house, Jutka Lakatosné, activist of AVM said: „Thousands of municipal apartments stay vacant while masses of people lose their housing. The answer of the government and the municipality to this phenomenon is the creation of mass shelters, and they blame homeless people instead of implementing long-term housing policies. This building, which has been staying empty for almost 20 years, used to be a hospital and is currently owned by a Virgin Islands based offshore company. So, is this how much we need hospitals or shelters for mothers?”

The squatters hung a giant banner from the window of the house with a sign that read: „Take a place!” The aim of the participants was to raise awareness among the public and decision makers about the fact that many Hungarians face serious housing problems and to the thousands of municipal apartments staying vacant. With political will, these real estates could be turned into affordable rental apartments. The Vice Mayor of the 6th district of Budapest, Gyula Óvári, the deputy notary of the district and the police were also present at the scene and tried to convince the squatters to leave the place since the building was dangerous. They referred to an official opinion dated 3 days earlier, which had deemed the house to be in a dangerous condition. The fire-fighters were also there, but they did not confirm the impending danger.

With the local government elections coming up, it is vital to draw attention to this question, as local governments have the power to take steps to ease the housing crisis and to facilitate the utilization of vacant buildings. The building occupied on Saturday stands as a good example as to how the Hungarian welfare system devolved since the regime change in the early 1990s. The building had originally served as a private sanatorium before it got into state property in the 1950s and later to municipal ownership. It was used as a hospital from 1931 to 1995, and it has been vacant ever since it was closed. The real estate was acquired by Finimim Ltd. in 2002, which is mainly owned by Amos Overseas Ltd. registered in the Virgin Islands. Although there is no publicly accessible information on the plans of the company, it is quite likely that the building was obtained as speculative investment and not to house people.

Vacant apartments that can be renovated for housing purposes are an enormous source of opportunity in solving the housing crisis: there could be social apartments or social institutions such as shelters for mothers or temporary homes for families in these buildings. Városkutatás Kft. and Habitat for Humanity Hungary developed a model of social housing agencies that could manage private apartments that are currently standing empty, which could both solve the housing problem of hundreds of thousands of people and benefit the owners at the same time. 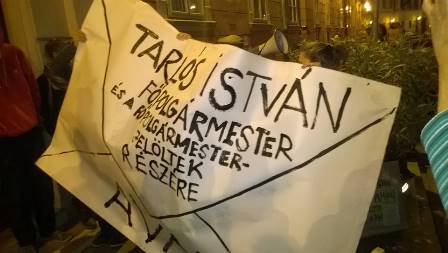 AVM has been demanding the utilization of empty buildings for many years now. The Vacant Buildings March was organized for the 4th time this year and we have voiced many proposals to decision makers on several occasions. We have organized several demonstrations for the creation of an extensive social housing system and the right to housing. In AVM’s view if the right to housing were codified it should also involve the prohibition of evictions without alternative placement. With the right to housing recognized, the state would not have to provide housing for free, but it should prevent homelessness and provide meaningful support for people who face serious housing issues. The utilization of vacant apartments would serve exactly this purpose.

Anna Vörös’s images about the occupation

Gabriella Csoszó’s images about the occupation