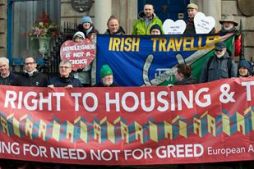 The housing crisis in Hungary cannot be understood independently from the European economic space. Housing difficulties are not independent from European policies supporting the free market and the liberalization of the real estate and banking sector, or restraining state supported social housing construction. The Europe-wide deepening housing crisis – from the Spanish mortgage crisis through the difficulties of the French social housing system to the undignified and for poor people unaffordable housing stock in Eastern European countries – puts a growing pressure on the European Union to consider housing issues among its common policies.

A few days before the European Parliamentary elections we would like to give propositions on how decision makers of the European Union, among them the future Hungarian MPs, could give adequate responses to the housing problems in European countries. Even though the European Parliament has a quite limited direct effect on housing policies of member states, or on the extent to which the European Commission (as main executive of the EU) considers housing to be a common issue. This limitation is well illustrated by the fact that despite progressive propositions of the European Parliament during the past year (on a European social housing action framework, on mortgages, and on an EU homelessness strategy), little has effectively changed regarding European housing policy. Nevertheless, these propositions are still very fresh, and it is more and more frequently raised in different institutions of the EU that housing questions should also be addressed on a European level – we thus expect that the new Parliament to be set up in June, and the new Commission, to be set up in October (with the new members having to be approved by the Parliament!), will put the question of housing on its agenda. We stress that if the necessary political will exists, the European and Hungarian housing situations could be significantly improved with certain – not even too complicated – European-level measures.

We thus make the following propositions to European Union decision makers, and among them, the Hungarian MPs to be elected this Sunday:

◦     ban of the criminalization of homelessness

◦     except building and maintenance of social housing from competition regulations

◦     ban of expulsions without adequate shelter

◦     the implementation of strategies concerning housing and homelessness should be regularly monitored by an independent expert commission, which, in necessary cases can formulate critiques concerning member states’ practices

◦     adopt an EU Homelessness Strategy and an EU Housing Strategy

◦     member states should be expected to respect these objectives when planning their EU-financed development projects.