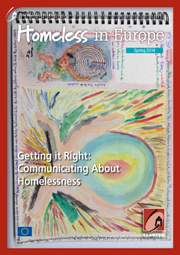 The representation of homeless people in the Hungarian media is often based on harmful stereotypes, which not only stigmatise homeless people, but also destroy the common sense of solidarity in our society. In the following article, we will present the main problems that homeless members of The City is for All, a homeless-led advocacy group in Budapest, and their allies have identified. In the second part of the article, we will offer suggestions for potential solutions as well. This text is based on the English translation of a leaflet that our group has distributed to thousands of press workers and media organisations over the past few years.

The most widespread problem is that media workers – following general public discourse – use the word „homeless” as a noun to refer to people who have no home. When homeless people are referred to as „the homeless,” we are reduced to our current condition – a condition that we are striving to change as soon as possible. With this linguistic practice, homelessness become our single most important characteristic, disregarding the fact that we are also – and more importantly – men, women, activists, shop assistants, cooks, etc.

A more serious case of this problem is when we are called some pejorative and offensive terms. We are not only called „the homeless,” but we also hear words like „hobo” or „bum.” The majority of us find such language deeply offensive to our dignity.

An even more extreme example of this is when animal metaphors are used to refer to homeless people, as this example from a weekly paper illustrates: „the homeless have proliferated in the neighbourhood.” We are human beings with the same dignity and consciousness as all other people and we find such metaphors highly offensive.

A problem closely related to this one is when the homelessness of a person is stated even if it has nothing to do with the reported action or event: „An altercation broke out among some homeless men when one of them attempted to take the girlfriend of the other.” Such texts present homelessness as the single most important characteristic of these people, as it if was something to be emphasised. In reality, homelessness is used to „spice up” the report as an altercation between two housed („regular”) men may not even make it into the news.

This practice can be particularly dangerous when the homelessness of a criminal offender is emphasised („the boy was chased by two homeless men with a knife” or „the homeless gang killed two members of the family”). These reports create the impression that homeless people are inherently more prone to commit crimes (which is not true) and stigmatise everyone who does not have a proper home.

It is also highly harmful when homeless people are cited as negative examples of certain phenomena. „For years he looked as if he were homeless. He has been unable to get himself a proper suit to this day.” In these statements, common stereotypes are reinforced. Sentences like these create the impression that we are essentially uniform and that this uniformity takes shape in something negative. The reality is quite the contrary! Homeless people are highly diverse, with unique family backgrounds and personal traits unique to each and every one of us.

A related problem is that homelessness is often identified with begging and living on the street. „Suddenly a homeless-looking person came up to me asking if I have some spare change.” This is a strong distortion of the facts: only about one in every ten homeless people in Hungary engages in begging and the vast majority of us never do. In addition, around 15% of all homeless people in Budapest live in public spaces, while 79% live in shelters and 6% use some other housing solutions. In other words, even if the people who live in public spaces are the most visible (and also often the most vulnerable), homeless people are not a homogeneous group and by treating us so, the media strongly distorts reality.

The images, footage and quotes that go with media reports make the problem even worse. Whenever the topic of homelessness is addressed, the illustrations almost exclusively show middle-aged, bearded, mostly inebriated men wearing dirty clothes. This visual representation significantly contributes to the reinforcement of the stereotypes. Undoubtedly, there are people among us who are may be close to this stereotype, but there are also a great many of us who do not look like this at all. To convey an authentic image, the media should stop using such a simplistic, generalising and reductionist representation of people who do not have a proper home.

The media often uses the image of homelessness to illustrate certain negative social phenomena. For example, when the text refers to urinating/defecating or drinking in public, the illustration is often that of a homeless person. Obviously, not all homeless people will engage in such activities and many people who have homes will.

Very often homeless people are represented as helpless victims in need of protection. While appreciating the goodwill behind such an approach, we do not endorse it for two reasons. First, such a representation disregards and conceals the strengths and capacities of homeless people, depriving us of our identity as active citizens. Second, it places an unduly large emphasis on the significance of external help, often glorifying the assistance offered by the social services rather than providing a more sophisticated and critical portrayal of the situation. What homeless people need most of all is not charity and individual protection, but access to safe and dignified housing. This aspect of homelessness, however, is often muted in most media reports.

Another, equally problematic approach is when homelessness is overly romanticised, that is when homelessness is portrayed as a lifestyle choice that brings a carefree life and freedom. This approach may be productive in changing public awareness, but it often lacks the depiction of the suffering and deprivation that goes along with our daily survival as homeless people.

Representations of homeless people in the media tend to focus almost exclusively on the personality and life story of the person in question. There are hardly any reports on the systemic problems that maintain and reproduce homelessness on a mass scale. In other words, there is too much focus on the consequences of losing one’s home, while hardly any mention is made of the underlying reasons and problems at the social level.

The list above may make us look very hard to please, but this is not the case. We would like to offer the following suggestions to media workers to help them create a more accurate and authentic representation of homelessness.

–          Refrain from using „a homeless” to mean „a homeless person” as well as from such pejorative terms as „bum” or „hobo.” When using the word „homeless,” always use it as an adjective together with a noun like „person” or „activist,” which contributes to the image of a unique person rather than the anonymous member of a group.

–          When choosing illustrations, stay away from entrenched stereotypes such as a faceless man lying on the street covered by dirty clothes. Make an effort to convey the diversity of our lives and experiences in your choice of images.

–          Avoid emphasising the fact someone is homelessness if this fact has no relevance to the story being told.

–          It is important that the topic of homelessness remains on the agenda of the media even after winter is over. Homelessness is not a seasonal problem, but something that causes suffering to a lot of people all year round. As a result, it should be addressed in all seasons regardless of the external temperature.

–          Present both the personal stories of homeless people and the underlying structural and social reasons behind why people have to be without a home.

–          Report on potential solutions and best practices. The solution to the problem of homelessness is not the distribution of hot tea and slices of bread but inclusive social and economic policies and the provision of proper housing for all. These suggestions should make their way into the mainstream media as well.

–          Ask questions about the responsibility of the state in preventing and producing homelessness. This is essential for an authentic and detailed representation of the issue.

–          While it is important that the positive aspects of homeless people’s lives are presented, do not forget about presenting the daily suffering and humiliation that homeless people face.

–          Homelessness should not be presented as the problem of homeless people but as an issue that concerns all of us regardless of our housing situation.

„I hardly recognized myself in the interview that was published about me.”

„Some journalists can’t even remember the proper name of our group.”

„Homeless spokespeople tend to be asked personal questions, but very few regarding issues of policy or politics.”

„I am often asked provocative questions related to party politics.”

„When journalists get to know a homeless activist directly, they immediately start sympathising with our goals.”

„More and more people are interested in the work of our group, and we get a lot of inquiries from the press.”

„There are some documentaries that aim to present a very realistic picture of homelessness, which also does justice to the experiences of homeless people.”

„Many media workers don’t know anything about homelessness. They are often hostile at the beginning, but when we give them a lot of information, they start to cooperate really well.”

„Some journalists have commented on how ‘fluently’ and ‘sophisticatedly’ I can speak, as if this were a surprise.”

Download „Homeless in Europe: Getting it Rights – communicating about homelessness”