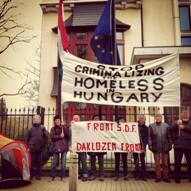 In response to the call for action by The City is For All, local organizations and individuals in 14 cities of three continents – from New York to Bangkok and Dublin to Istanbul – staged protests against the criminalization of homelessness in Hungary in front of Hungarian embassies and consulates.

As the call for action by The City is for All emphasized, the governing parties insist on the criminalization of homelessness despite the 2012 November decision of the Constitutional Court that ruled that „neither the removal of homeless people from public areas nor the incentive to avail themselves of the social care system shall be considered as a constitutional reason that could be the base of the criminalization of the homeless people’s living in public areas”, and that „homelessness is a social problem which the State must handle in the framework of the social administration and social care instead of punishment.” The government and many of the local authorities disregarded both the ruling of the Constitutional Court and the widespread domestic and international opposition by first writing the criminalization of homelessness into the „Fundamental Law” (Hungary’s formal constitution) and then into the Act on Misdemeanors and local ordinances.

The criminalization of homelessness is part of a comprehensive authoritarian and punitive turn in Hungary that unfolded after the 2010 elections: constitutional democracy was essentially abolished; labor rights were curtailed, the right to strike limited; entitlement to welfare benefits was restricted and a harsh workfare regime was implemented; asylum-seekers became subject to an unjustifiable detention regime; severe penal policies were introduced; and the surveillance of state employees was authorized. Since the transition to capitalism in 1990, the poverty rate and the level of income inequality have never been as high as today.

There were protests in front of Hungarian embassies and consulates in Bangkok,Vienna,Essenand Lisbon on Thursday, the February 13, in Berlin, Brussels, Dublin (see also here), Istanbul(see also here), Cluj, New York, Paris and Prague on Friday, February 14, and in London on Saturday, February 15. Most protests included the delivery of a letter addressed to the Hungarian government condemning the criminalization of homelessness. A number of protests were initiated by organizations of people directly affected by poverty and homelessness. The London protest was organized by Hungarians living in London, together with local groups. A Bucharest organization joined the international campaign with online images of solidarity, and local groups sent a letter of protest to the Hungarian embassy in The Netherlands. For brief summaries of all the protests, see here for February 13 here, and for February 14 and 15 here. For selected pictures of the international solidarity, see here.

In Budapest, The City is For All is organizing a protest on Saturday, February 22 in front of the government office that was created to detain homeless people prosecuted for living in public spaces. The government spent 20 million HUF (65 000 €) in 2013, and 226 million HUF (730 000 €) in 2014 for the operation of this office. The City is For All demands that this office is shut down and that all legislation that criminalizes homelessness is repealed.