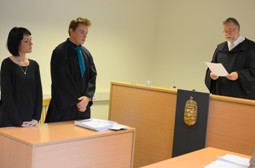 On September 10 and 12, the Budapest district court acquitted two housing rights activists from the City is for All grassroots organization, a group where homeless people and their non-homeless allies campaign together for equal rights (including that of housing) for all citizens. The two activists tried to prevent the destruction of huts of homeless people living in a foresty area of Budapest, but they ended up handcuffed and arrested by the policemen present (see video).

On March 27th, 2012, the public company contracted for cleaning and park maintenance by the city hall of the 9th district of Budapest, destroyed the huts of four homeless people in a forest without respecting any official procedures required. Even though the homeless people had built their shacks illegally, this does not mean that their property can be destroyed or taken away without any written notice and time for preparation. Activists had tried to reason with the representative of the company prior to the eviction, calling his attention, among others, to the report of the Hungarian Commissioner for Fundamental Rights, Prof. Máté Szabó, condemning a very similar action of a different district of Budapest. The company, however, went ahead with what they called the cleaning of the forests: collecting and removing garbage, including the huts and personal belongings of the people living there.

Two activists tried to prevent the destruction of the huts, asking for help from the 8 policemen present, reminding them of the legal constraints binding the public company. The police, however, handcuffed and arrested the two activists, instead, and fined them for about 100 euros (more than the monthly amount of the regular social benefit) for „disobeying legal action”. Later that day, some delegates of the Office of the Hungarian Commissioner for Fundamental Rights also visited the scene of the destructions and started an investigation. The investigation concluded that no local authority can neglect the usual procedures of eviction (written notices well in advance, providing information about alternatives, etc.) nor fail to provide real, lasting housing options to the people thus evicted. He drew attention to the fact that social provision and housing are legally binding obligations of the districts, and giving people information about shelters does not suffice.

The court ruled that

However, the fight is far from being over. In September, the Hungarian Parliament will vote on a proposal that wishes to grant local authorities the right to define where homeless people can live, as well as would make it illegal to construct a cabin or hut on public grounds without the written consent of the owner – thus homeless people building their own huts in foresty, non-populated areas can be persecuted without any written notice.