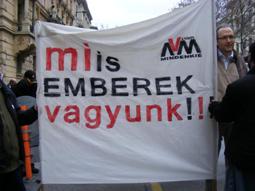 On March 11, 2013 the Hungarian Parliament adopted the Fourth Amendment to the Fundamental Law of Hungary, which criminalizes homelessness and gives constitutional jurisdiction to the prosecution of homeless people.

In November of 2012 the Constitutional Court of Hungary overturned the provision (Act II of 2012 on Misdemeanors, Offence Procedures, and the Offence Registration System) pertaining to infractions in which homelessness in public areas is punishable. In this decision the Constitutional Court clearly stated that making permanent dwelling in public areas a punishable act is an infringement on one’s right to human dignity, to trust in the law, to equality in the eyes of the law and to the prohibition of discrimination and inhumane treatment. The constitutional court stated that „homelessness is a social problem which the state should deal with by means of social administration and social provisions and not through punishment.”

The Fourth Amendment allows this unconstitutional regulation to be a part of the Fundamental Law. In a country governed by the rule of law it is inadmissible and anti-democratic that these laws, which the highest judicial body overturned, be simply written into the constitution so that they cannot be reviewed by the Constitutional Court.

This amendment undermines Hungarian democracy and the rule of law, not only by criminalizing homelessness, but also by establishing the following in the Fundamental Law:

– the possibility of university contract that mandates state-funded students to work in Hungary after graduation;

– the exclusion of life partners without children and same-sex couples from the definition of family;

– the possibility of limitations on the freedom of speech;

– a limitation on fair elections;

– the further limitation on judicial independence;

– the regulation that damages separation of Church and State, and discrimination among religions;

– the nullification of 22 years of decisions handed down by the Constitutional Court;

– additionally, the idea that the government majority can write whatever it wishes into the Fundament Law because future amendments cannot be reviewed by the Constitutional Court from a substantive viewpoint.

This decision leads us down a very dangerous path. If this amendment becomes part of the Fundamental Law it will signify that the Hungarian State does not demonstrate solidarity with its most vulnerable citizens. Instead of being helped, through the implementation of meaningful social and housing measures, homeless people will be excluded from society. The message that the State views the members of certain groups as second-class citizens causes incalculable damage not only to those concerned, but also to all of Hungarian society.

The City is for All has fought hard against the criminalization of homelessness since the idea of such a law was born in 2010. Despite all our struggles and against great public resistance and international pressure, the Hungarian Parliament went ahead and adopted this inhumane and anti-democratic law. As a last resort, The City is for All has sent an open letter to the President of the Republic reminding him of his responsibility to every Hungarian citizen, including homeless people, and asking him to veto the law.