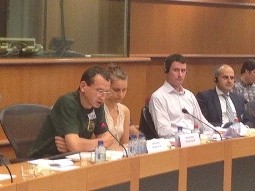 „Criminalizing and penalizing homeless people for carrying out life-sustaining activities in public because there is nowhere to go is a problem across the EU” said Rina Beers, President of FEANTSA today at the European Parliament in Brussels. FEANTSA, Housing Rights Watch and Sylvie Guillaume MEP (S&D – France) co-hosted a public hearing today to raise awareness about the criminalization of homelessness in Europe.

Presenting to the hearing were groups from across Europe including, The City is For All from Hungary, Klimaka from Greece, and a coalition of NGOs from France (Fondation Abbe Pierre, Emmaus-Solidarite, etc.). The City is For All presented their strategic litigation campaign which successfully overturned criminalizing measures in Hungary last fall, only to see the Hungarian Prime Minister amend the constitution to prevent such legal challenges in the future. „We will continue fighting to protect human rights for all people, including people who are homeless,” said representatives from The City is For All.

Call to action for the EU

Members of the European Parliament are clearly concerned about the issue, as Ms Guillaume indicated in her opening statements. The NGOs and activists called upon the European Commission to take action and work together to address the issue. „While the measures that criminalize homeless people for having to sleep rough, or using public spaces maybe be set and enforced at local level, the EU institutions have an important role to play. The European Commission should recognize that measures that allow the criminalization of homelessness violate human rights, and as such, violate the values upon which the EU is founded. Poverty is not a crime, it’s a scandal.” concluded Rina Beers.

Speech by László Kardos (homeless activist) at the EP hearing

The new wave of criminalization

Call for solidarity with homeless people in Hungary