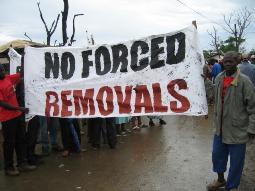 A solidarity message by City is for All to Abahlali baseMjondolo, which is one of the biggest organisation of shack dwellers in South Africa, whose activist was recently murdered.

Our group, The City is for All, is made up of people who are currently homeless or have experienced homelessness, and their allies. As a group, we work for human rights and dignity for all, and for the right to adequate housing.

We are deeply saddened by the news of the recent assassination of one of your prominent activists, Nkululeko Gwala, on 26 June, in Durban. We send our deepest condolences and wish to express our solidarity with you from Budapest, Hungary.

Nkululeko Gwala was your third member, and altogether the fourth housing activist, who was assassinated this year in Durban alone.

Nkululeko, in the days before his murder, courageously openly criticised the authorities for  corruption, questioned a city councillor about the reasons why the most disadvantaged people are left out of social housing programs, and resisted political threats as well. It is also commendable that he had been known for collecting evidence about intimidation and corruption.

We find it unacceptable to threaten, physically hurt and even murder those who stand up for the rights of the most disadvantaged people, and dare to fight corruption. We condemn the death of the four housing rights activists.

We call on the South African authorities to immediately launch an independent and thorough investigation into the murder of Nkululeko Gwala and the other three activists. As a democractic country, it is the responsibility of the South African government to ensure that the perpetrators are held to account and sanctioned appropriately. We urge the South African government to respect its international human rights obligations and take all appropriate measures to guarantee the personal security and protection of all people, without discrimination. We additionally ask the South African authorities to stop forced evictions, respect the right to adequate housing, primarily by providing social housing to the most disadvantaged people.

Here in Hungary we also fight against housing problems, housing poverty, forced evictions, and for the elimination of homelessness, and for the rights of people living on the streets or in inadequate housing. We therefore share your cause and express our solidarity with your struggle. Fortunately we do not face threat to our lives, nonetheless measures of the Hungarian government make our situation rather difficult too. Despite that the Hungarian Constitutional Court earlier found it unconstitutional, on the proposal of the government the possibility of criminalising homelessness was incorporated into our Constitution, which can have detrimental effect on people living on the streets.

Our groups are linked by common goals of achieving a life of basic dignity and justice for all in the society, and of ensuring respect for fundamental rights without discrimination.

We express our solidarity with your mission. We have also sent a letter to the South Africa’s Ambassador to Hungary, calling on the government to respect its internationak obligations.

Wishing you lots of strength and success, and hoping that you stay safe, with friendship, from Hungary

The Hungarian version of this text can be accessed here.