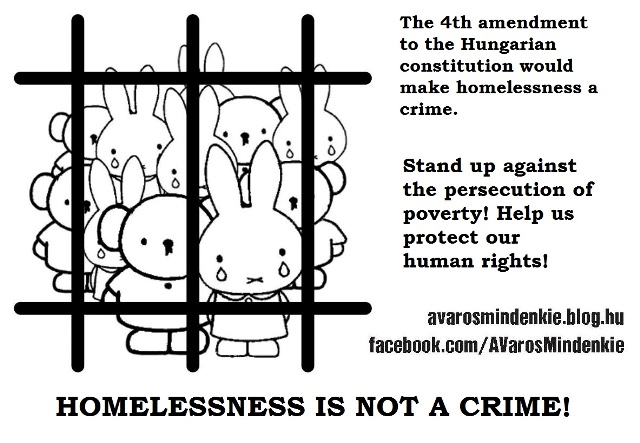 Homelessness is not a crime! Help us stop the Hungarian Parliament from enacting the criminalization of homelessness in the nation’s Constitution.

* If you live in Hungary, join the demonstration against the 4th amendment of the constitution on March 9, 2013 at 3pm in Alkotmány utca! Spread the news, invite your friends!

* If you live in the European Union, alert your representatives in the European Parliament to this issue and ask them to exert pressure on the Hungarian government to repeal the amendment!

* If you are an official or decision-maker in the EU, the UN or other international organizations, condemn the Hungarian government publicly and pressure them to repeal the amendment.

* If you are an activist or member of an international organization, ask them to publicly condemn the Hungarian government for punishing its poorest and most vulnerable citizens!

* If you live anywhere in the world and have good contacts with the press, let them know about this issue and ask them to report it extensively!