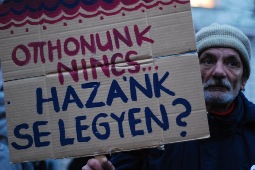 Fidesz-KDNP, the ruling party coalition in Hungary, intends to enact the criminalization of homelessness in the Hungarian constitution. This step is the culmination of the two-year-long campaign of vengeance that the ruling powers have waged against one of the most vulnerable and poorest social groups in the country: homeless people living in the streets.

How did we get here?

Politicians of Fidesz-KDNP have seized all opportunities in the past two years to forcibly shunt homeless people out of public sight.

In the fall of 2010, the Law on Constructions was amended to give local governments great powers to regulate the „proper uses” of public space. As stated in the original proposal, one of the main aims of the amendment was to empower municipalities to ban homeless people from public spaces.

The Municipality of Budapest was the first to take advantage of this opportunity and passed a local regulation, which basically prohibited homelessness in public space. The initiative was then followed by regulations in other districts and municipalities.

The next step in the process of criminalization came in November 2011, when the Parliament imposed a $700 fine or jail upon those who repeatedly broke municipal laws regarding „residential habitation in public spaces.”

In order to bring the persecution of the homeless to a national level, residential habitation in public spaces was included in the Law on Infractions. As a result, from January 2012, it became legal across the country to fine or jail homeless people living in public spaces.

All these changes have been surrounded by intensive grassroots opposition, which unfortunately could not prevent the inhumane laws from entering into effect. Finally, at the proposal of the Commissioner for Fundamental Rights, the Constitutional Court examined the Law on Infractions and decided in November 2012 that punishing „residential habitation in public spaces” is unconstitutional as living in public space does not infringe on anyone else’s rights, does not cause damage and does not endanger public order. In its arguments, the Court made it clear that „homelessness is a social problem that the state has to solve through social administration and social services and not through punishment.” As a result, the law was repealed with immediate effect.

The Fidesz-KDNP ruling coalition was so outraged by the decision of the Constitutional Court that Prime Minister Viktor Orbán reacted immediately: de said that the government would initiate a so-called national dialogue on the topic and, if necessary, they would include the prohibition of street homelessness in the constitution (now called Fundamental Law). While the national consultation did not happen, it did not come as a surprise that the bill on the 4th amendment of the Fundamental Law, which will be voted on in the second week of March, will contain the following:

In addition to legal means, the politicians of Fidesz-KDNP have also used semi-legal methods to disappear homeless people from public spaces. Among them is Sándor Pintér, minister of interior who in the fall of 2011 labeled all distributors of the street newspaper called Fedél Nélkül beggars and ordered their perpetual harassment. In this „crusade” several hundred homeless people were charged with traffic infractions.

In February 2011, the ministry of interior sent a letter to all larger municipalities asking them to look for real estate that could be turned into so-called survival spots. The „survival spots” would not be social institutions but correctional facilities where homeless people could be detained. Although this plan was not executed, in the fall of 2011, the first homeless shelter housing a jail and police station was opened in Budapest (so far the jail has not been used for detention).

In September, 2011, the local government of Józsefváros (the 8th district of Budapest) organized a referendum on the homelessness. Although the referendum was not valid (only 16% of the people eligible to vote attended), Máté Kocsis, the local mayor used the results of the initiative to drive away homeless people from the district under the pretext of a „law-and-order program.” In the context of this program, hundreds of the homeless people were arrested and fined for sleeping in the streets, begging, picking through garbage or urinating in public. Yet it was clear from the communication of the municipality that their real guilt was that they had nowhere to live.

Finally, István Tarlós, the mayor Budapest launches intensive campaigns from time to time to ban homeless people from some of the underground pedestrian passages of Budapest. He did this in the fall of 2010 when he launched the „Program of Social Peace” to chase homeless people away and then again at the beginning of 2013 when – under the pretext of public works and public safety – signposts erected were erected in several underground passages that prevented people from lying or sitting by the wall. The public space supervising officers and the police have assisted the mayor in all these initiatives.

The City is for All, together with many other Hungarian and international NGOs and professional organizations, has stood up against the current regime’s oppressive and discriminative anti-homelessness and anti-poor policies since 2010. In all our public statements, we have demanded that instead of cruel and ineffective measures, real solutions have to be found to address the problem of mass homelessness and housing poverty.

We have tried to convince the government to address homelessness as a social rather than a criminal issue. We have filed petitions, organized public hearings, requested reviews of laws, we have negotiated, discussed and protested; our members have even engaged in civil disobedience to stop politicians from turning their backs on the most vulnerable citizens. All in vain.

In the meantime the government has been trying to discredit us. They have called us anarchist herds, a rioting minority and radicalizing homeless people. However, we still believe that the majority of the country supports our cause and disagrees with the criminalization of homelessness! This has been reaffirmed by the decision of the Constitutional Court: the government’s punitive policies contradict both common sense and the basic values of Hungarian society.

The government’s rage has grown as their manic efforts have been criticized and resisted by citizens, civil society and even the Constitutional Court. There is nothing that would justify the criminalization of homelessness at the constitutional level other than the want of revenge. With this amendment, it is not only homeless citizens, but Hungarian democracy that is dragged in the mud.

There is something perversely cruel in how the government has been working on the persecution of the homeless over the past two years. And this cruelty is evident both in regulation and practice.

Following the decision of the Constitutional Court, the Hungarian Civil Liberties Union requested public data to find out how many people have been fined under the regulation repealed last November. Between April and November of 2012, altogether 2200 people were charged with habitual residence in public spaces. In more than 1500 cases a total of more than $180 thousand were incurred in fines. These fines were incurred not because the „perpetrators” hurt anyone, or they stole anything and not because they damaged something. The fines were incurred only because people are homeless. This data does not include those who were punished between the springs of 2011 and 2012 under local regulations, or those who have been punished for other life-sustaining activities, but the real reason was their homelessness. And there are thousands of those, too.

What could the GOVERNMENT and MUNICIPALITIES do?

The politicians of Fidesz-KDNP seem relentless when it comes to the persecution of homeless people. However, they dedicate much less time and energy to the prevention and elimination of homelessness and housing poverty, which affect masses of people. The current regime has not done anything to advance real solutions to mass homelessness.

In the meantime, professionals are all in agreement on how to address the situation. Instead of punishment, homelessness should be prevented. Those who are already homeless should be helped into housing again. To this end, what we need is comprehensive reform of national and local housing and social policies:

– a broad network of social housing should be developed;

– housing subsidies should be raised and expanded;

– housing subsidies should not support the acquisition of private property but the maintenance of housing;

– the enforceable right to housing should be enacted

– evictions without alternative placement should be banned;

– debt management services should be extended and made more efficient;

– the homeless services system should be reformed in a way that does not conserve homelessness, but strives to achieve housing solutions for its clients.

How can YOU help us?

* If you live in Hungary, join the demonstrations organized by several organization and citizens against the 4th amendment of the Fundamental Law on March 9, 2013 at 3pm in Alkotmány utca! Spread the news, invite your friends!

* If you live in the European Union, alert your representatives in the European Parliament to this issue and ask them to exert pressure on the Hungarian government to repeal the amendment!

* If you are an official or decision-maker in the EU, the UN or other international organizations, please go out of your way to publicly condemn the Hungarian government and pressure them to repeal the amendment.

* If you are an activist or member of an international organization, ask them to publicly condemn the Hungarian government for punishing its poorest and most vulnerable citizens!

* If you live anywhere in the world and have good contacts with the press, let them know about this issue and ask them to report it extensively!