In September 2010 we organized a press conference to assess the housing programs of all democratic parties running in the municipal elections in Budapest. In addition to offering our critiques, we evaluated the programs with school grades based on how much they would improve homeless people’s conditions. In March 2011 we organized an advocacy training for homeless people. Our aim was to inform people living in shelters about the possibilities of advocacy in their institutions. We talked about the importance of collective action and the ways in which homeless people can communicate their needs and interests to the management. Since then, many participants have become members of The City is for All. We prevented an eviction

On November 2, 2011 we prevented the evic-tion of our member, Irén who rented a run-down storage in Józsefváros with her children. Even though Irén neatly restored the space, the government did not appreciate her efforts and ordered her to leave the place. For months, we negotiated with the municipality with no avail. Finally, we stood up for our right to housing at a demonstration, where the deputy mayor promised Irén that her housing won’t be lost. Campaign against the criminalization of homelessness

From the fall of 2010, we fought for more than a year against the law that declared street homelessness an offence. Although the law was finally accepted, we successfully drew the attention of the public to the inhumanity of the law, and we mobilized many people in our protest actions. At our demonstration held in front of the Parliament, more than 600 people expressed their solidarity with homeless people. 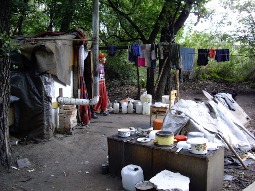 Prevention of unlawful destruction of shacks

In the summer of 2012, we prevented the government of Kőbánya from unlawfully demolishing the self-built shacks of the inhabitants of the Terebesi forest. We led negotiations between the inhabitants and the local government, securing assurances that the inhabitants would be provided safe and appropriate housing. 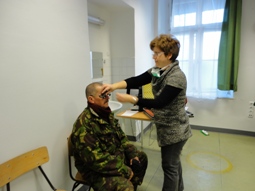 Glasses for the masses

Many homeless people are unable to en-gage in the public sphere because they suffer from visual impairment. In our chari-ty campaign we collected hundreds of pairs of glasses and provided free eye exams to dozens of homeless individuals, in order to provide them with appropriate glasses. 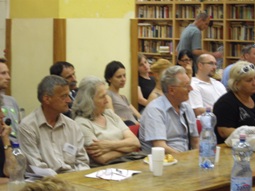 Forum on the registration of public services

In 2012 an electronic database was intro-duced requiring users to register their health insurance number in order to access services, which creates many difficulties for homeless people. To relay these concerns to the relevant authorities we organized a public forum for homeless people, service providers and employees of the govern-ment office implementing the new system. 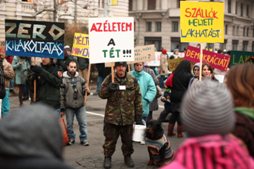 Demonstration for the right to housing

In December 2012 we held a demonstration in front of the Parliament with the participation of hundreds of supporters against the criminalization of homelessness and the enactment of the right to housing. Several groups were represented such as the Roma living in segregated settlements, those defaulting on their mortgages and victims of domestic violence. 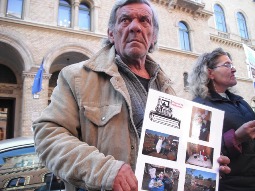 Six homeless people sued the Zugló local government for unlawfully destroying their homes in 2011. The shack-dwellers won the lawsuit in 2014, and the courts ordered millions of HUF to be paid as compensation. 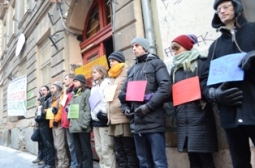 In spring of 2013, 27 activists had their day in court following the occupation of an empty municipally owned building in Budapest. The protestors demanded social housing as a solu-tion to homelessness instead of criminaliza-tion and shelters. Originally they were fined for over 1 million HUF, which was later reduced to 400,000 HU. According to the court, their actions were harmless to society and they drew attention to important social issues.

From the forest to housing

In spring 2013, two social housing units were granted to homeless people in Budapest, who had previously lived in the Terebes forest. The two units had been vacant before they were reconstructed through the joint effort of Social Housing Reconstruction Camp, The City is for All and several other organizations and individuals. 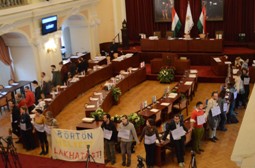 The homeless activists of The City is for All and their allies were holding hands, telling poems and singing around the chairs of the Budapest City Council members in the council’s assembly room on November 14, 2013. The group’s aim was to prevent the assembly from passing an ordinance, which extends the criminalization of homeless people to a major part of the city. 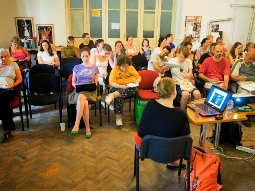 Since 2013, we have organized our annual summer university around housing, activism and social movements. Every year we draw a crowd of 200 people from all walks of life including many who directly experience exclusion or oppression. 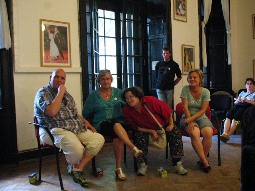 Who wants to be a housing politician?

In the summer of 2014 we organized a public contest on housing modeled after Who Wants to be a Millionaire. Four teams competed against each other, where most members were affected by housing poverty. The winning team received a free dinner and a book as a prize. 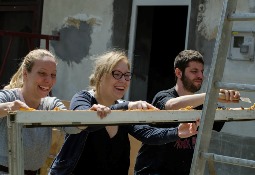 From the Streets into Housing!

Members of AVM with a background in so-cial work founded the From the Streets into Housing! Association whose goal is to pro-mote Housing First and help street home-less people directly into housing. 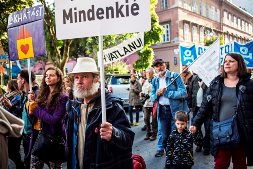 March for the right to housing

Since 2010, we have organized the Vacant Buildings March against homelessness and poverty with the participation of hundreds of people. In 2016 we renamed the event the March for Housing and drew almost a thousand people who demanded an end to evictions, more social housing and real support for those living in housing poverty. 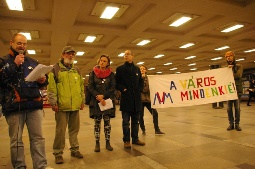 In 2016, the Hungarian Helsinki Committee and the City is for All reached an agreement with the Budapest Police Department to end random identity checks of homeless people. The police acknowledged that checking someone’s ID because they look poor is unlawful and they promised to refrain from unnecessary identity checks near soup kitchens and social institutions. 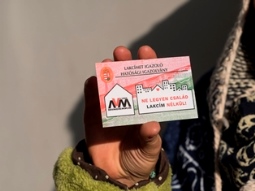 Fighting for the right to a proper address

More than 100.000 people in Hungary have inadequate addresses. People without a permanent addree or an address specifically designed for homeless people face serioues difficulties when they want to access social or health care services, attend school, open a bank account or purchase a sim card for their cell phones. Since 2016, we have been lobbying for legalislative changes to solve the problems deriving from a lack of a permanent address. 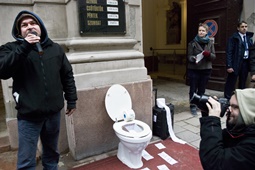 In Budapest there are barely 80 public toilets for more than one and a half million people. In addition there are very few public toilets that are free of charge and accessible to disabled people. The City is for All has started a large-scale campaign to change this situation. In addition to many actions and lobbying efforts, in 2017 collected 3300 signatures on our petition to the municipality of Budapest, the Ministry of Human Resources and the Ministry of Interior. 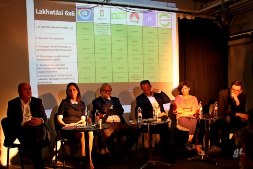 In October 2017, six opposition parties (DK, Együtt, LMP, MSZP, Momentum and Párbeszéd) made a commitment to six of our demands including the codification of the right to housing, the expansion of the subsi-dized rental-housing sector, the introduction of national housing maintenance and debt support, measures to make private rentals affordable and an end to the criminalization of homelessness and squatting. 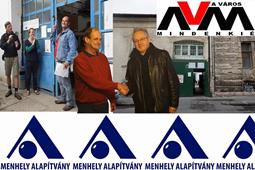 The luggage storage on Vajdahunyad street is now open on weekends

Homeless people often have difficulties stor-ing their belongings so many of them use the Vajdahunyad street baggage storage facility run by the Shelter Foundation. Origi-nally, this service was only available on weekdays so customers could not access their belongings for days. After collecting signatures and negotiations initiated by The City is for All, the Foundation extended their opening hours to 365 days a year.

Meeting point: every Friday from 3 to 5pm on Blaha Lujza tér

Support the struggle for housing justice in Hungary with your donation!