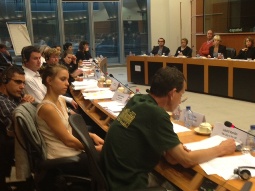 My name is László Kardos, I am an activist of The City if for All. The City if for All is a grassroots organization of homeless people and their allies who fight for fundamental human rights, including the right to housing. We would like to draw your attention to one of the most severe social problems of Hungary that is homelessness. We want to achieve such a comprehensive, systemic change in our home country that allows this most vulnerable social stratum to realize their human rights and attain housing of human dignity.

Criminalization: Today, In Hungary, homeless people live in a stigmatized, humiliated way, furthermore, in fear. They are not able to practice their citizenship rights and need to run away and hide from authorities.

Due to fast impoverishment, tens of thousands of people have become homeless since the social-economic transition and this process goes on even today because there is no adequate housing strategy in Hungary that would guarantee the possibility of a normal, human life for everyone.

Tens of thousands of people are forced to live on the street or in homeless shelters today in Hungary. The shelter system can provide accommodation for only a fraction of these people because it lacks in adequate capacities. And in any ways, the homeless service system cannot provide the basics of an adequate life. Shelters are overpopulated, often people need to sleep on the corridors. People rather choose the street for this very reason, among others.

On the other hand, institutions of the homeless service system hospitalize their users, since they cannot provide solutions that would help them escape this situation. Their programs are not functional, because – due to the lack of viable alternatives – in most cases the participants find themselves on the street again in the end.

According to the planned amendment, the authorities will be authorized to fine people who do not have a chance but to live on the street. They cannot pay these fines, therefore they will very likely end up in prison. Imprisonment obviously deprives homeless people from the possibility to realize their fundamental citizenship rights and causes long-term harms too: with a prison experience they would have no chance to find adequate employment therefore remain without income. Hence, they do not have any real chance to re-integrate into society.

There are areas in Budapest today where, if a homeless person sits down police officers immediately appear and send them away. This is humiliating and violates people’s fundamental rights. Those who eat at charity food provisions on the street often face harassment by the authorities – police officers presuppose that „where there is a crowd, there is a criminal too”, therefore continuously ID people waiting in line. However, the only sin of the people in the line is that they are hungry. Who dares to criticize this practice sometimes gets threatened. I myself have experienced this. I filed a complaint, but nothing effectual has happened.

Thus, there are 3 possibilities for rough sleepers in Hungary at the moment:

The first one is to use a shelter voluntarily, provided that one can find one that has a free bed and accepts the fact that even the very basic necessities of human life are barely provided there.

I myself live at such a place, therefore I know what these people need to face day by day. Privacy is absolutely lacking, these shelters are often unhygienic, flooded with insects, thefts happen daily, and the circumstances are not appropriate for autonomous living.

One example: at one of the shelters in Budapest in the winter crisis period a poster was telling the inhabitants that Chatting is forbidden! This does not suggest autonomous living to me.

The second opportunity is to stay on the street and live in fear of being fined, that is equal to imprisonment as thee people have no chance to pay the very high fines. This obviously violates the fundamental rights of the given person and they would also need to live stigmatized by imprisonment in the rest of their lives.

The third possibility is running away from the authorities and hiding as a criminal. This is very dangerous though, since – due to the constant moving – nobody is aware of the person’s whereabouts, therefore, their life may be in danger, especially by hypothermia, and in such circumstances they cannot get help.

Today in Hungary, the constitution does not set the fundamental rights of the people but legitimizes the persecution of homeless people. Hungary – as far as we know – is the only country in the world with such a practice. The minister of the interior has proposed an amendment of the Act on Misdemeanors recently that, if came into force, would lead to the need for many homeless people to run away and hide. However, the solution to such problems is not violence but an adequate housing policy that aims at providing housing for the people not selling out state real estate property and that supports the housing of every citizen, not only the upper-/middle-classes.

All that lot of money spent on the harassment, persecution and „storage” of the poorest and most oppressed strata should be used for other ends. Ends that serve the solution of the problem. This amount could support the housing and ease the living problems of hundreds of thousands of people.

What has The City is for All done to oppose the criminalization of homelessness in Hungary:

We have tried to draw attention to these problems in plenty of press releases.

We have sent open letters to Hungarian MPs in which we outlined the adequate solution to the problem of homelessness and asked their support — we have not received any meaningful response.

We have tried to voice our views in parliamentary committees — in vain. We were either not allowed to speak or our opinion was not taken into consideration.

We have turned to law enforcement authorities to discuss these issues – with no success.

We have initiated petitions targeting decision-makers. With not much success.

He have organized a hearing for politicians — they did not come.

We have organized demonstrations – one day more than 500 people lay down in front of the Parliament to demonstrate their solidarity with homeless people.

Then we have organized a demonstration in which we practiced civil disobedience in order to draw attention to the problem. All the participating activists were taken into short-term arrest and fined.

What has The City is for All done on the EU level:

We have contacted individual MEPs asking for their support, but unfortunately we have not received any response.

We have contacted the Fundamental Rights’ Agency, but, again, unfortunately we have not received any response.

We have met the cabinet of Commissioner Andor in Budapest and later we have sent our international call for support to the cabinet. He informed us about the very limited possibilities of the Commission to intervene, namely issuing recommendations to the Hungarian government and drawing attention to the means of the European Social Fund.

We have also contributed to the report of the Venice Commission – we were glad to note that the Commission’s final report did criticize the practice of regulating homelessness on the constitutional level. However, this report does not contain a moral statement about the criminalization of homeless people.

We have also issued a contribution to the Tavares report as to the fact that the criminalization of homelessness violates fundamental EU values and rights. We were pleased to be informed that this issue was part of the final report.

And now we are here to ask you in person that the European Union consider the criminalization of homelessness just as serious a violation of fundamental EU rights and values as the other anti-democratic measures of the current Hungarian government. The persecution, humiliation and incarceration of people living in poverty is one of the most severe harms to democracy – the system based on the equal dignity and participation of each and every citizen.

And a final thought: the minister of the interior has claimed in public that he wants to establish order in Hungary. I can say that The City is for All wants order too. An order in which everyone’s fundamental human rights are respected and no one needs to live on the street. We condemn the „solution” of the current conundrum by means of violence.

I hereby ask you to think about what you have just heard and support us according to your possibilities. We hope that our common struggle will achieve its goal and the most vulnerable inhabitants of Hungary will also be able claim that they have fundamental human rights and that they are full citizens of the European Union.

The Hungarian version of the speech can be accessed here,