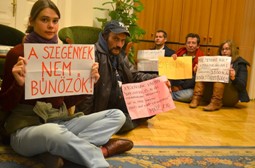 We are very happy to announce that the Hungarian Constitutional Court, the country’s highest court, has confirmed what The City is for All has represented for years: „The mere fact that someone lives in public space does not infringe on other people’s rights, does not cause damage and does not endanger the habitual use of space or public order” – as a result, punishing street homelessness is unconstitutional. The decision of the Constitutional Court is a victory for the rule of law, for homeless people and for everyone who has spoken out against the public persecution of homeless people over the years.

It is very significant that the Constitutional Court declared that „It is detrimental to the freedom of movement derived from the right to human dignity if the state forces someone to use social services through punishment.” In other words, street homelessness has to be ended not through force but through social services of appropriate quality.

We call on those who have supported the public persecution of homelessness – especially MP and local mayor Máté Kocsis, Minister of Interior Sándor Pintér, Secretary of State Miklós Soltész and Mayor of Budapest István Tarlós – to read the decision of the Constitutional Court carefully and publicly apologize to homeless people and all law-abiding citizens of Hungary.

The City is for All does not fight for the right to live on the streets freely, but for the right to housing. This is why we call on the government and all Members of Parliament to take the court’s decision seriously regarding public policies about homelessness: „homelessness is a social problem that the state has to address through social policy and not through punishment.” If they want to rectify their measures against the rule of law and homeless citizens, the government should go forward and introduce a housing policy reform that ensures decent housing for all citizens including a law on the right to housing, the radical increase in housing subsidies for low-income people and the creation of a broad network of social housing.

English-language information about the grassroots struggle against the criminalization of homelessness:

They are harassing homeless people (video)

Hundreds demonstrated against the criminalization of homelessness

Demonstration against the criminalization of homelessness (video)

Performance and sit-in ended in the arrest of activists

Sit-in against the criminalization of homelessness (video)

We are not afraid of breaking laws for justice